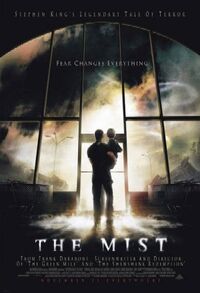 The Scorpion-Flies are minor antagonists in the 2007 American horror film The Mist.

These seemingly innocuous insects are attracted to bright lights, something the grocery store trapped in the mist happens to be full of. Despite their harmless appearance, these insects are armed with venomous stingers that cause their victims to swell up violently.

Scorpion-Flies are large insects stretching slightly under a foot in length. Their heads are dominated by two large eyes and insectoid mandibles. Their bodies are a pale flesh tone in color except for the plates of blackish-purple chitinous armor running down their backs. They have two large transparent wings, six legs, and long scorpion-like tails ending in black stingers.

The Scorpion-Flies possess the following powers and abilities:

Two of the Scorpion-Flies that enter the store are killed by two store-goers, while the other three are eaten by Pterobuzzards.

Add a photo to this gallery
Retrieved from "https://movie-monster.fandom.com/wiki/Scorpion-Flies?oldid=1060"
Community content is available under CC-BY-SA unless otherwise noted.