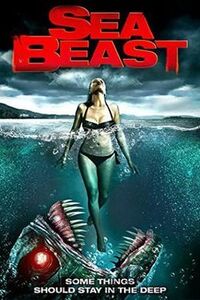 The Sea Beasts, also known as Troglodytes, are the main antagonists of the 2008 Canadian-American horror film Sea Beast.

These egg-laying creatures attacked a small town near the ocean after being driven from their underwater cave by a thunderstorm.

The Sea Beasts are large, somewhat humanoid creatures with aspects of both fish and amphibians. They have gray, scaleless skin and well-developed monsters. Their faces have bulbous white eyes, exposed gums, and numerous anglerfish-like teeth. They have long tongues and webbed feet and hands.

The Sea Beasts possess the following powers and abilities:

The creatures are destroyed after the ship containing their nest is blown up.

Add a photo to this gallery
Retrieved from "https://movie-monster.fandom.com/wiki/Sea_Beasts?oldid=1258"
Community content is available under CC-BY-SA unless otherwise noted.