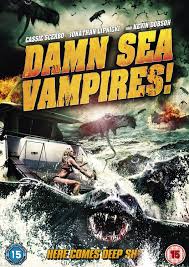 Deep sea divers awakened a species of bloodsucking rays from their slumber in the abyssal sea, causing them to move inland and attack the locals.

The Sea Vampires are large black stingray-like creatures with wide cape-like bodies, heads like those of eels, and large fangs. They also have large spikes in rows on their underbellies.

The Sea Vampires possess the following powers and abilities:

Add a photo to this gallery
Retrieved from "https://movie-monster.fandom.com/wiki/Sea_Vampires?oldid=3015"
Community content is available under CC-BY-SA unless otherwise noted.