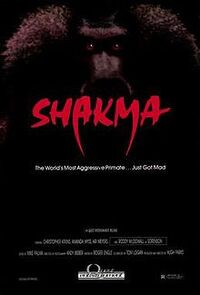 Shakma is the main antagonist of the 1990 American horror film Shakma.

Shakma is a hyper-aggressive baboon being experimented on by medical students. When he is only sedated instead of euthanized like he is supposed to be, he escapes from his cage and begins killing the students one by one.

Shakma is a brown hamadryas baboon with long fur and numerous sharp teeth.

Shakma is killed after he is set on fire.

Add a photo to this gallery
Retrieved from "https://movie-monster.fandom.com/wiki/Shakma?oldid=1224"
Community content is available under CC-BY-SA unless otherwise noted.