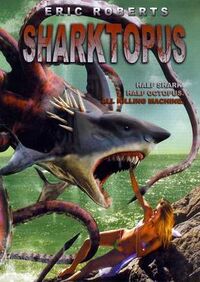 The Sharktopus is the main antagonist of the 2010 American horror film Sharktopus.

Dubbed "Project S-11", Sharktopus was designed by Dr. Nathan Sands to be the perfect killing machine to be used by the United States Navy. However, the control chip embedded in its brain becomes fried, releasing the creature from his control.

The Sharktopus resembles the front half of a great white shark with long red tentacles trailing behind it. The Sharktopus also possesses spikes emerging from its gills and spikes on the tips of its tentacles.

The Sharktopus possesses the following powers and abilities:

The Sharktopus is killed after the controlling chip in its brain is detonated, blowing it up. However, it is revealed in the sequels that one of its offspring survived.

Add a photo to this gallery
Retrieved from "https://movie-monster.fandom.com/wiki/Sharktopus?oldid=891"
Community content is available under CC-BY-SA unless otherwise noted.