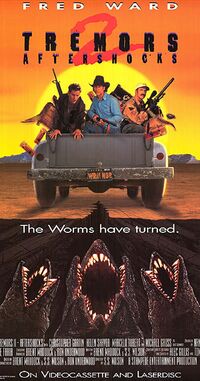 The Shriekers are the main antagonists of the 1996 American comedy-horror film Tremors 2: Aftershocks and its four sequels.

After a Graboid consumes sufficient food, it will undergo a several-hour long metamorphosis process, releasing between 3 to 6 theropod-like Shriekers from its body like a caterpillar becoming a butterfly.

Shriekers are 4-foot tall bipedal mollusks with a theropod dinosaur-like body shape. Their beaks are similar to those of the Graboids, being made up of a wide upper jaw, a thin lower jaw, and two hooked mandibles. Instead of three mouthed tentacles, they possess a single tongue that lacks jaws of its own. Shriekers possess large red pouches on their necks. On top of their heads, they have an orange, brain-like organ that can open up, allowing them to sense body heat like a pit viper.

At the end of the film, the Shriekers are trapped inside an ammunitions warehouse, which is blown up with several thousand pounds of explosive, killing them all.

Add a photo to this gallery
Retrieved from "https://movie-monster.fandom.com/wiki/Shriekers?oldid=792"
Community content is available under CC-BY-SA unless otherwise noted.