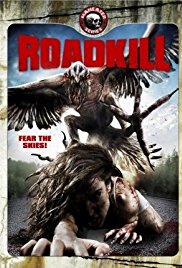 The Simuroc is the main antagonist of the 2011 American horror film Roadkill.

When a group of college-age friends on a road trip in Ireland accidentally hit an old woman with their RV, the hag vows that she will enact her revenge by summoning an ancient mythical bird to kill them.

The Simuroc resembles a large featherless vulture with brown skin and a thick gray beak. Its eyes are small and yellow. Instead of feathers, it appears to have wings and tail "feathers" composed of tattered brown skin.

The Simuroc possesses the following powers and abilities:

The Simuroc is successful in killing off all of the protagonists.

Add a photo to this gallery
Retrieved from "https://movie-monster.fandom.com/wiki/Simuroc?oldid=1267"
Community content is available under CC-BY-SA unless otherwise noted.