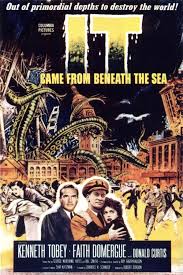 The Sixtopus, usually just referred to as the Giant Octopus, is the main antagonist of the 1955 American action-horror film It Came from Beneath the Sea.

Hailing from the Mindanao Deep, this gigantic six-legged octopus was driven from its territory and irradiated by hydrogen bomb tests off the coast of the Philippines.

The Sixtopus is an enormous gray octopus with six tentacles and spikes above each eye.

The Sixtopus possesses the following powers and abilities:

The Sixtopus is killed after it is shot with a torpedo.

Add a photo to this gallery
Retrieved from "https://movie-monster.fandom.com/wiki/Sixtopus?oldid=1270"
Community content is available under CC-BY-SA unless otherwise noted.