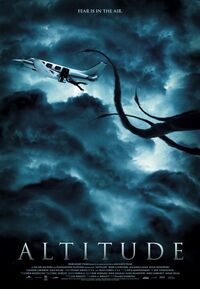 Skythulhu is the main antagonist of the 2010 Canadian horror film Altitude.

A group of friends flying in a small plane to see a concert are hit with mysterious turbulence that traps them in a nightmarish alternate dimension filled with endless sky and inhabited by a giant, tentacled monster.

Skythulhu is a large dark cephalopod-like beast with a lamprey-like mouth lined with sharp teeth and over 50 long thin tentacles.

Skythulhu survives to the end of the film.

Add a photo to this gallery
Retrieved from "https://movie-monster.fandom.com/wiki/Skythulhu?oldid=1274"
Community content is available under CC-BY-SA unless otherwise noted.