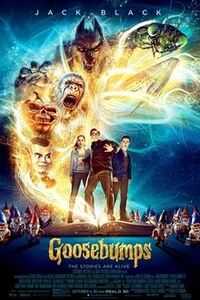 Slappy is the main antagonist of the 2015 American comedy-horror film Goosebumps.

The new kid in town and his friend accidentally release a group of author R. L. Stine's monstrous creations from their manuscript prisons, one of which is the villainous dummy Slappy.

Slappy is a wooden ventriloquist dummy with Caucasian skin and molded black hair. He has large black eyebrows and large brown eyes. He wears a black suit, a white shirt, and a red bowtie.

Zach manages to finish a new hastily written Goosebumps book in which all of the monsters are defeated, sucking them (and Slappy) into it. 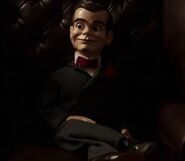 Add a photo to this gallery
Retrieved from "https://movie-monster.fandom.com/wiki/Slappy?oldid=2096"
Community content is available under CC-BY-SA unless otherwise noted.