Slim the Klown is a supporting antagonist in the 1988 American comedy-horror film Killer Klowns from Outer Space.

Slim is one of the most prominent Klowns in the film and has among the highest body counts of the film, not to mention being one of the few Klowns to use any sort of actual language.

Slim is a tall thin Klown with orange hair arranged in a star shape, a bright pink bodysuit with blue stripes on the arms, and a light pink frill around his neck.

Slim the Klown possesses the following powers and abilities: 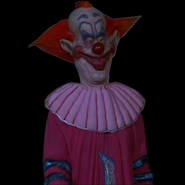 Add a photo to this gallery
Retrieved from "https://movie-monster.fandom.com/wiki/Slim_the_Klown?oldid=477"
Community content is available under CC-BY-SA unless otherwise noted.