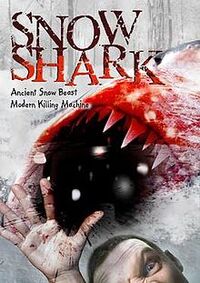 Awakening from its several million years long slumber, this prehistoric creature is a shark with the ability to swim through the snow.

The Snow Shark possesses the following powers and abilities:

The Snow Shark attempts to eat Mike, but he pulls the pin on a grenade, killing them both. However, the film's end shows that there are more Snow Sharks.

Add a photo to this gallery
Retrieved from "https://movie-monster.fandom.com/wiki/Snow_Shark?oldid=702"
Community content is available under CC-BY-SA unless otherwise noted.