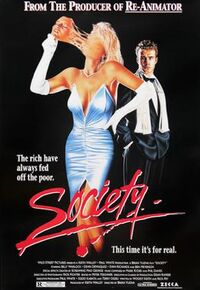 The Socialites are the main antagonists of the 1989 American horror film Society.

Years of selected breeding have granted a small group of aristocratic people the ability to morph their body parts and even meld together.

The Socialites resemble normal wealthy, aristocratic humans. However, they are capable of transforming their bodies into grotesque forms and fusing into a giant solid mass.

The Socialites possesses the following powers and abilities:

None of the Socialites are killed, allowing them to continue to spread into Washington, D.C..

Add a photo to this gallery
Retrieved from "https://movie-monster.fandom.com/wiki/Socialites?oldid=793"
Community content is available under CC-BY-SA unless otherwise noted.