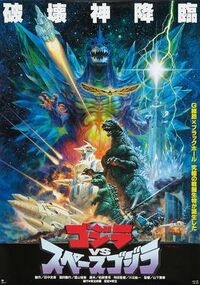 SpaceGodzilla is the main antagonist of the 1994 Japanese kaiju film Godzilla vs. SpaceGodzilla.

When Biollante dispersed into the atmosphere, some of her Godzilla cells entered a black hole, mutated, and emerged from a white hole as a malevolent clone of Godzilla with control over crystals.

SpaceGodzilla closely resembles a much bulkier clone of Godzilla, but its skin is mostly navy blue and its underbelly is purple. SpaceGodzilla's back and tail are covered in enormous, translucent, white crystals.

SpaceGodzilla is eventually destroyed by Godzilla's red spiral ray, causing the former to explode into millions of tiny crystals. 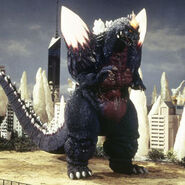 Add a photo to this gallery
Retrieved from "https://movie-monster.fandom.com/wiki/SpaceGodzilla?oldid=1646"
Community content is available under CC-BY-SA unless otherwise noted.