Spikey the Klown, also known as Spike the Klown, is a supporting antagonist in the 1988 American comedy-horror film Killer Klowns from Outer Space.

Spikey's most notable appearance in the film involves him luring a man into letting his guard down by performing a short hand-puppet show in a park gazebo.

Spikey is a tall thin Klown with spiky red hair and squinting eyes. His bodysuit is green with a yellow star pattern, and he wears a pale yellow frill around his neck.

Spikey the Klown possesses the following powers and abilities: 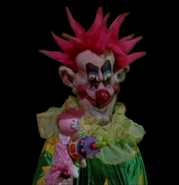 Add a photo to this gallery
Retrieved from "https://movie-monster.fandom.com/wiki/Spikey_the_Klown?oldid=479"
Community content is available under CC-BY-SA unless otherwise noted.