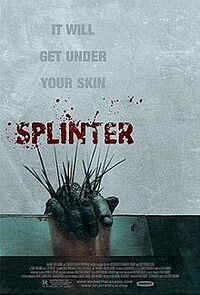 The Splinter Fungus is the main antagonist of the 2008 American action-horror film Splinter. It is a parasitic alien from unknown origins that jabs itself into any organic, sentient creatures such as animals and humans, proceed to slowly kill them via infection and then reanimates their bodies to control them as hosts. During the infection, the victims are unable to fight back the Splinter Fungus.

The Fungus Hosts are sometimes compared to zombies due to their "brainless behavior" and physical decaying appearances, the only difference is the Fungus hosts aren't targeting into eating human flesh or brains and only seek to assimilate other victims to become future hosts.

The Splinter Fungus has no known origins, although it can be seen to have been born within the deep forests.

The Splinter Fungus manifests as a series of thin, black quills that varies in length. The Fungus appears to make the hosts' blood much more thicker and darker colored. The dark blood can be seen to be moving as if it was "sentient" in some sort.

The Splinter Fungus possesses the following powers and abilities:

After fully infecting it's victims, they become it's Fungus Hosts and gains the following powers:

The last of the possessed corpses are burned alive after the gas station the film is set in is ignited. However, the ending reveals that the forest is filled with infected corpses that are soon to reanimate.

Lacey's hand, now possessed by the Fungus, became self-aware when it got severed.
Community content is available under CC-BY-SA unless otherwise noted.
Advertisement