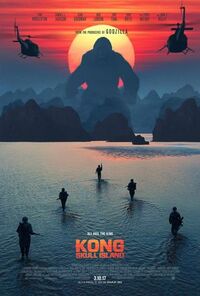 The Spore Mantis is a minor antagonist in the 2017 American kaiju film Kong: Skull Island.

After he separates from the rest of the group, Jack Chapman briefly encounters an enormous tree-like insect before being killed by a Skullcrawler.

The Spore Mantis resembles an enormous stick insect crossed with a thick light brown tree. Inside its body is a parasitic organism resembling a slug with powerful jaws.

The Spore Mantis possesses the following powers and abilities:

The Spore Mantis is last seen fleeing from a Skullcrawler.

Add a photo to this gallery
Retrieved from "https://movie-monster.fandom.com/wiki/Spore_Mantis?oldid=1671"
Community content is available under CC-BY-SA unless otherwise noted.