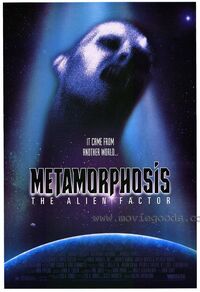 Spot the Wonder Blob is a major antagonist in the 1990 American horror film Metamorphosis: The Alien Factor.

Spot was an extraterrestrial creature that was kept in captivity by the TALOS organization, which was trying to extract DNA from the creature for use in genetic experiments.

In its infant form, Spot is a green frog-sized monster with rubbery skin, two long legs ending in sharp toenails, two black eyes (the left eye protruding on a long stalk), and a small mouth filled with sharp teeth.

Spot the Wonder Blob possesses the following powers and abilities:

Spot the Wonder Blob is seen disappearing into the air vents, escaping any sort of death. It is seen at the very end of the film bursting through the facility's roof, having transformed into a giant monster.

Adult
Add a photo to this gallery
Retrieved from "https://movie-monster.fandom.com/wiki/Spot_the_Wonder_Blob?oldid=1421"
Community content is available under CC-BY-SA unless otherwise noted.