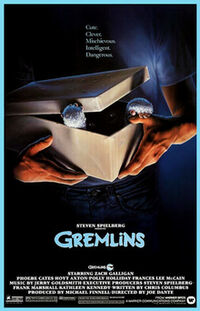 Stripe, later reincarnated as Mohawk, is the main antagonist of the 1984 American comedy-horror film Gremlins and its sequel (in his reincarnated form of Mohawk).

The most diabolical of Gizmo's offspring, Stripe is the de facto leader of the Gremlins in the first film until he is killed by Gizmo. In the second film, he is once again born from Gizmo, reincarnated as Mohawk.

Stripe, like most Gremlins, is a chimpanzee-like reptilian creature with large bat-like ears, long arms, and sharp claws. His main distinguishing feature is his bright white mohawk giving him his name.

In Gremlins 2: The New Batch, his reincarnated form, Mohawk, possesses a fish-like fin in place of his white stripe of hair. In his more monstrous form, Mohawk's legs are replaced with a spider-like body.

In the first film, Gizmo opens the window blinds as Stripe is preparing to multiply again, bathing him in sunlight and killing him. In the second film, Mohawk is killed by Gizmo once again, who shoots him with a flaming arrow, setting him on fire.

Mohawk
Add a photo to this gallery
Retrieved from "https://movie-monster.fandom.com/wiki/Stripe?oldid=2049"
Community content is available under CC-BY-SA unless otherwise noted.