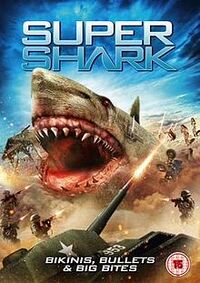 Super Shark is the main antagonist of the 2011 American action-horror film Super Shark.

A toxic goo used in oil drilling seeps into the ocean, mutating a great white shark into an enormous, bulletproof monster.

The Super Shark is a large great white-like shark measuring at least 70 feet in length.

The Super Shark possesses the following powers and abilities:

An explosive device made of C4 is dropped into the shark's mouth, blowing it to pieces.

Add a photo to this gallery
Retrieved from "https://movie-monster.fandom.com/wiki/Super_Shark?oldid=1698"
Community content is available under CC-BY-SA unless otherwise noted.