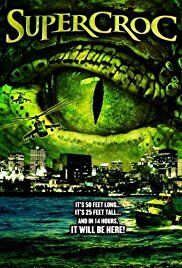 The Supercroc is the main antagonist of the 2007 American action-horror film Supercroc.

After being awoken from its several thousand year-long sleep in an undersea cave, a gigantic prehistoric crocodile rises to the surface and begins to make its way to Los Angeles.

The Supercroc resembles a large crocodile with muddy green scales and yellow eyes.

The Supercroc possesses the following powers and abilities:

The Supercroc is blown up after a bomb is detonated near its vulnerable underbelly. However, the film ends with an egg hatching nearby.

Add a photo to this gallery
Retrieved from "https://movie-monster.fandom.com/wiki/Supercroc?oldid=1342"
Community content is available under CC-BY-SA unless otherwise noted.