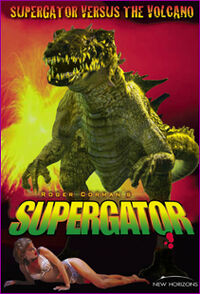 The Supergator is the main antagonist of the 2007 American horror film Supergator.

Recreated from fossilized DNA, this enormous Deinosuchus escaped from a secret bio-engineering lab situated near a volcano.

The Supergator resembles a large crocodile with abnormally long spikes running down its back.

The Supergator possesses the following powers and abilities:

The Supergator is blown up after being lured into a fake volcano.

Add a photo to this gallery
Retrieved from "https://movie-monster.fandom.com/wiki/Supergator?oldid=2884"
Community content is available under CC-BY-SA unless otherwise noted.