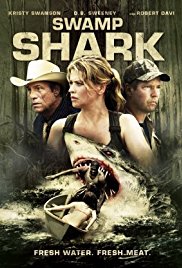 The Swamp Shark is the main antagonist of the 2011 American horror film Swamp Shark.

After an animal smuggler attempts to smuggle a deadly shark through a swamp, the animal escapes and go on a rampage, taking down the locals one by one.

The Swamp Shark is a large bull shark-like creature with striped gray skin and ridges on its back that resemble armor plating.

The Swamp Shark possesses the following powers and abilities:

The Swamp Shark is killed after it is dragged onto land and sliced up by a boat propeller. 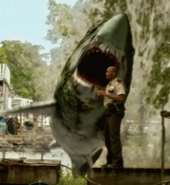 Add a photo to this gallery
Retrieved from "https://movie-monster.fandom.com/wiki/Swamp_Shark?oldid=707"
Community content is available under CC-BY-SA unless otherwise noted.