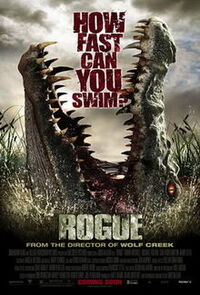 Sweetheart is the main antagonist of the 2007 Australian horror film Rogue.

American tourist Pete McKell is a travel journalist accompanying a group of tourists on a crocodile watching river cruise in Northern Australia, but the situation turns when a giant man-eating crocodile attacks the group.

Sweetheart is killed after he is impaled in the head by a pointed log.

Add a photo to this gallery
Retrieved from "https://movie-monster.fandom.com/wiki/Sweetheart?oldid=2534"
Community content is available under CC-BY-SA unless otherwise noted.