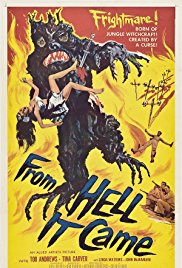 Tabonga, sometimes spelled as Tabanga, is the main antagonist of the 1957 American horror film From Hell It Came.

A South Seas island prince is wrongly accused of murder and sentenced to death. His body is placed inside of a hollow tree, which is then reanimated in a hulking monster by nuclear radiation.

Tabonga is a large humanoid tree with blackish-colored tree bark, no leaves, and a permanent scowling face. It has several chipped pieces atop its head that resemble a crown and two large growths on its shoulders.

Tabonga is killed when a knife is driven all the way through its heart.

Add a photo to this gallery
Retrieved from "https://movie-monster.fandom.com/wiki/Tabonga?oldid=2337"
Community content is available under CC-BY-SA unless otherwise noted.