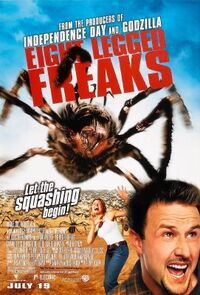 Tank is a major antagonist in the 2002 American comedy-horror film Eight Legged Freaks.

Being exposed to toxic chemicals from mutated crickets caused a large tarantula named Tank to grow to enormous sizes.

Tank is an enormous tarantula with brown hair covering its body, excluding certain parts that have fur of a more blackish tint.

Tank, like most of the spiders, is killed during an explosion in the mall. 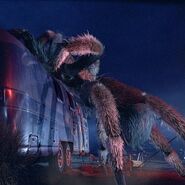 Add a photo to this gallery
Retrieved from "https://movie-monster.fandom.com/wiki/Tank?oldid=2262"
Community content is available under CC-BY-SA unless otherwise noted.