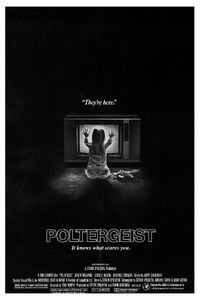 The Beast, formerly known as Reverend Henry Kane, is the main antagonist of the 1982 American horror film Poltergeist and its two sequels.

Once the leader of a 19th-century utopian cult, Kane convinced his followers to take refuge with him in an underground chamber to wait for the end of the world to pass. When the supposed time of the The Second Coming of Christ came and went, he still refused to allow his followers to leave, keeping them there until their deaths. Absorbing their life force, he became a powerful demon known as "The Beast".

In the first film, The Beast manifests directly twice, first as a giant flaming skull and then later as a tall wispy skeletal figure with incredibly long arms.

In the second film, The Beast manifests as a tequila worm. After being swallowed by Steven, The Beast possesses him for a short while before forcing himself out through Steven's mouth. He emerges as a giant mutated tequila worm, which quickly mutates into a slime-covered skeletal torso with a reptilian ghoul-like face. Eventually, The Beast shows his true form, a tall, black ghost with a skeletal figure and an array of multiple heads, presumably those of the people whose souls he has consumed.

The Beast possesses the following powers and abilities:

At the end of the second film, The Beast is temporarily defeated after Steven throws a magical spear at him, given to him by Taylor the medicine man. In the third film, the psychic Tangina sacrifices herself and leads Kane into the light where he crosses over.

Beast
Add a photo to this gallery
Retrieved from "https://movie-monster.fandom.com/wiki/The_Beast?oldid=3822"
Community content is available under CC-BY-SA unless otherwise noted.