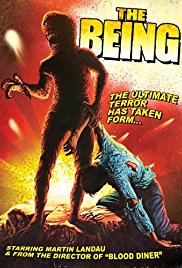 The Being, formerly known as Michael Smith, is the main antagonist of the 1983 American horror film The Being.

Once young teenager Michael Smith, The Being is a mutant brought about by exposure to radioactive materials from the dumpsite of the town of Pottsville, Idaho.

The Being is a tall emaciated humanoid with no skin and exposed muscle. Its head is large, bulbous, and somewhat phallic in shape. The creature has two mismatched deep-set eyes, and it has a mouth full of sharp teeth.

The Being possesses the following powers and abilities:

The Being is hacked to death with an axe by Detective Lutz. However, another similar mutant is born at the end of the film.

Add a photo to this gallery
Retrieved from "https://movie-monster.fandom.com/wiki/The_Being?oldid=1415"
Community content is available under CC-BY-SA unless otherwise noted.