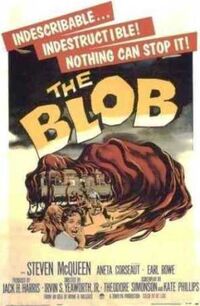 The Blob is the main antagonist of the 1958 American horror film The Blob and its 1988 remake.

The Blob was a transparent ball of slime that crash-landed on Earth inside of a meteorite, soon taking on its classic blood-red coloration after consuming a local farmer.

The Blob is essentially nothing more than a gigantic gelatinous mass of red (initially clear) slime.

The Blob possesses the following powers and abilities:

The Blob is defeated after it is frozen solid and then air-lifted into the Arctic.

1988
Community content is available under CC-BY-SA unless otherwise noted.
Advertisement