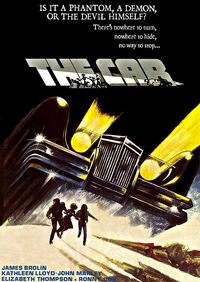 The Car is the main antagonist of the 1977 American horror film The Car.

The entity is a demonically-possessed Lincoln Continental that terrorizes the small town of Santa Ynez. The origin of its demonic powers is never explained.

The Car appears as a matte black Lincoln Continental Mark III. Its headlights are sunken in to resemble evil eyes.

The Car possesses the following powers and abilities:

The Car is lured into falling off of a cliff, where it explodes.

Add a photo to this gallery
Retrieved from "https://movie-monster.fandom.com/wiki/The_Car?oldid=922"
Community content is available under CC-BY-SA unless otherwise noted.