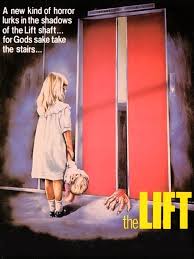 The Lift is the main antagonist of the 1983 Dutch horror film The Lift and its 2001 American remake The Shaft.

The Rising Sun electronics company has outfitted an Amsterdam elevator with an experimental microprocessor, giving it sentience and an appetite for murder.

The Lift is a typical elevator car with metallic, silvery inner walls and a red light on its ceiling.

The Lift possesses the following powers and abilities:

The Lift is seemingly killed after it is shot in the "heart" by the Rising Sun CEO, but the end of the film reveals that it is still alive.

2001
Add a photo to this gallery
Retrieved from "https://movie-monster.fandom.com/wiki/The_Lift?oldid=1459"
Community content is available under CC-BY-SA unless otherwise noted.