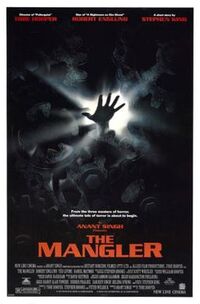 The Mangler is the main antagonist of the 1995 American horror film The Mangler.

The Mangler is a demonically possessed laundry press at Bill Gartley's Blue Ribbon Laundry service, where it begins to kill employees and customers alike.

The Mangler is a large dark gray, almost black, industrial laundry press. It has a black conveyor belt that moves laundry into its main pressing chamber; several archways stand over the treads.

The Mangler possesses the following powers and abilities:

While struggling to catch the protagonists, who have fallen down a manhole too small for The Mangler to enter, a crucial piece of it is dislodged and falls into the water, shutting it down. However, it later returns to the store in perfect condition.

Add a photo to this gallery
Retrieved from "https://movie-monster.fandom.com/wiki/The_Mangler?oldid=1353"
Community content is available under CC-BY-SA unless otherwise noted.