The Rake is the antagonist in the 2018 film, The Rake.

According to the mythology, firsthand accounts of The Rake has been described as early as in the 12th century and documented for the first time in 1691. Ashley and Ben witness the brutal murder of their parents at a young age. Years later, Ashley remains convinced it wasn't a person that killed her parents and fears that the perpetrator will come back for her and her family.

The Rakes possess the following powers and abilities: 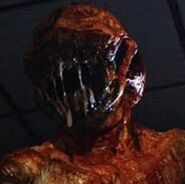