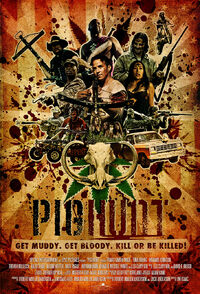 The Ripper is the main antagonist of the 2008 American horror film Pig Hunt.

Captured and worshipped as a nature deity by a group of hillbillies for its large size, The Ripper was a 3,000-pound wild boar with an appetite for human flesh.

The Ripper is a gigantic boar with medium-length brown hair and four tusks: two upward-curved tusks on the top jaw and two very long tusks on the bottom jaw.

The Ripper possesses the following powers and abilities:

The Ripper was finally slain by John after he shot an arrow into its lower jaw.

Add a photo to this gallery
Retrieved from "https://movie-monster.fandom.com/wiki/The_Ripper?oldid=2034"
Community content is available under CC-BY-SA unless otherwise noted.