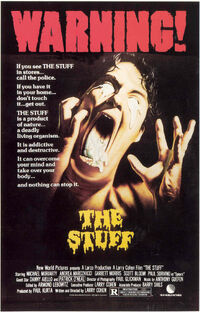 The Stuff is the main antagonist of the 1985 American horror film The Stuff.

When several railroad workers discover a white gelatinous substance bubbling up from a crack in the ground, it is found to be delicious and marketed to the public as an ice cream substitute. However, it is actually a parasitic organism that hollows out its victims and turns them into zombie slaves.

The Stuff is a white, milky, gelatinous substance.

The Stuff possesses the following powers and abilities:

The Stuff epidemic is seemingly ended when all remaining stores of it are burned. However, the ending of the film reveals that it is still being sold on the black market.

Add a photo to this gallery
Retrieved from "https://movie-monster.fandom.com/wiki/The_Stuff?oldid=1365"
Community content is available under CC-BY-SA unless otherwise noted.