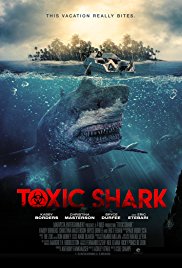 The Toxic Shark is the main antagonist of the 2017 American horror film Toxic Shark.

This mutant shark had the ability to fire globules of corrosive acid, as well as the ability to infect those who survived its bites with a pathogen that transformed them into cannibalistic savages.

The Toxic Shark is a large 35-foot great white shark with a dark back and lighter underbelly. Its skin is scarred and covered in red cuts or veins. The shark appears to have a horn-like projection sticking out of its forehead.

The Toxic Shark possesses the following powers and abilities:

The Toxic Shark is killed after a flare is fired into its mouth, setting it ablaze.

Add a photo to this gallery
Retrieved from "https://movie-monster.fandom.com/wiki/Toxic_Shark?oldid=699"
Community content is available under CC-BY-SA unless otherwise noted.