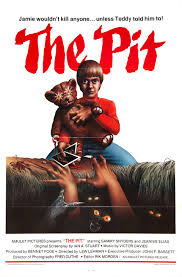 The Tra-la-logs are the main antagonists of the 1981 Canadian horror film The Pit.

Young Jamie and his beloved (and sentient) teddy bear Teddy discover a pit full of hairy, carnivorous beasts, and Teddy suggests feeding those who have wronged Jamie to the creatures.

The Tra-la-logs are short humanoids with gray skin and filthy dark hair. Their faces are like a mix between a primate of some kind and a boar, with sloping foreheads, underbites with protruding tusks, flaring nostrils, and glowing orange eyes.

The Tra-la-logs possess the following powers and abilities:

The Tra-la-logs are chased back into the pit after their attack on the countryside and are shot to death by the townspeople. At the film's end, Jamie is sent to live with relatives and encounters a young girl, who feeds him to her own pit full of Tra-la-logs.

Add a photo to this gallery
Retrieved from "https://movie-monster.fandom.com/wiki/Tra-la-logs?oldid=1463"
Community content is available under CC-BY-SA unless otherwise noted.