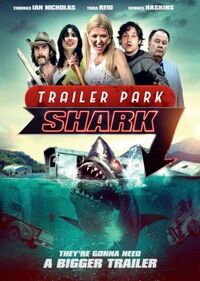 When a tropical storm leaves the Soggy Meadows trailer park completely flooded, it brings with it a hungry great white shark looking for human victims.

The Trailer Park Shark appears to be a large great white shark with a gray back and white underbelly.

The Trailer Park Shark possesses the following powers and abilities:

The shark is sliced into pieces after getting pulled into a wind turbine.

Add a photo to this gallery
Retrieved from "https://movie-monster.fandom.com/wiki/Trailer_Park_Shark?oldid=1378"
Community content is available under CC-BY-SA unless otherwise noted.