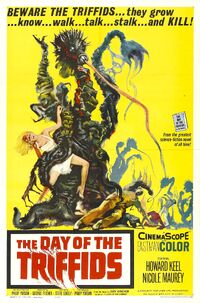 The Triffids are the main antagonist of the 1962 British horror film The Day of the Triffids and its remakes.

Domesticated by humans and farmed for the valuable oil they produce, the Triffids gain the upper hand when a mysterious meteor shower and an accompanying flash of bright light renders the Earth's population completely blind, allowing the carnivorous plants to pick people off one by one.

The Triffids are tall, thin carnivorous plants. Their bases resemble muscular masses of roots that allow them to walk at slow speeds. It actually walks on three stubby "feet", two of which move in synchronicity with one another while the third helps to keep balance. Sticking out of its root mass are several sharp spines used for communication. The Triffid's main body is a long tube ending in a spotted flower, the inside of which contains a long venomous stinger that flicks out like a lizard's tongue.

The Triffids possess the following powers and abilities:

The Triffids are killed after it is discovered that their weakness is saltwater.

2009
Add a photo to this gallery
Retrieved from "https://movie-monster.fandom.com/wiki/Triffids?oldid=1468"
Community content is available under CC-BY-SA unless otherwise noted.