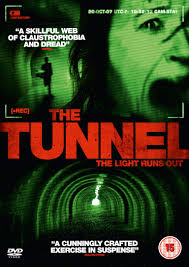 The Tunnel Stalker is the main antagonist of the 2011 Australian horror film The Tunnel.

A journalist named Natasha sets off into the abandoned train tunnels of Sydney, Australia, to uncover the explanation behind the cancellation of a government project, only to discover a creature that inhabits the tunnels.

The Tunnel Stalker is a tall emaciated humanoid with light-colored skin, a gaunt face, and two small glowing eyes.

The Tunnel Stalker possesses the following powers and abilities:

The creature survives to the end of the film.

Add a photo to this gallery
Retrieved from "https://movie-monster.fandom.com/wiki/Tunnel_Stalker?oldid=1473"
Community content is available under CC-BY-SA unless otherwise noted.