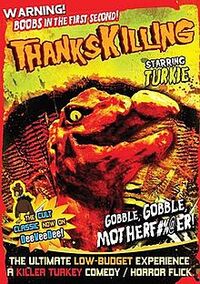 Turkie is the main antagonist of the 2008 American comedy-horror film ThanksKilling.

Turkie is a wise-cracking turkey demon who rises every 505 years to massacre every Caucasian person he encounters as part of a revenge plot by a Native American shaman.

Turkie is seemingly killed after being shot in the head, but the dumpster he is blasted into contains toxic waste that reanimates him. He is later set on fire. However, at the film's end, his spirit possesses the Thanksgiving dinner turkey, setting up a sequel.