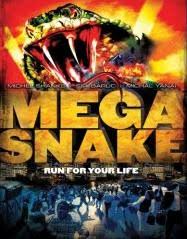 Unteka is the main antagonist of the 2007 American horror film Mega Snake.

When Duff Daniels, whose father was killed by a venomous snake, steals a jar containing a mythical snake from a Native American snake handler, the jar accidentally breaks and releases the ever-growing creature.

Unteka is a gigantic blackish-green constrictor snake with a lighter underbelly and an expandable lower jaw.

Les Daniels allows himself to be swallowed whole by Unteka. When Screaming Hawk is about to be killed by it, Les emerges from within the snake, having cut out its heart from the inside.

Add a photo to this gallery
Retrieved from "https://movie-monster.fandom.com/wiki/Unteka?oldid=1485"
Community content is available under CC-BY-SA unless otherwise noted.