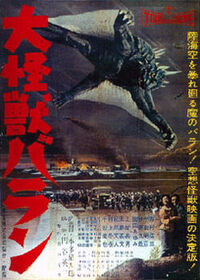 Varan is the main antagonist of the 1958 Japanese kaiju film Varan.

Living beneath a lake near a small village and feared by its inhabitants as the angry god "Baradagi", Varan emerged from its hiding place and went on a rampage.

Varan is a large tan-colored dinosaur with a theropod posture, long spines running down its back, and gliding membranes between its legs.

Varan was killed after it was tricked into swallowing several explosives. 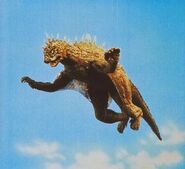 Add a photo to this gallery
Retrieved from "https://movie-monster.fandom.com/wiki/Varan?oldid=3010"
Community content is available under CC-BY-SA unless otherwise noted.