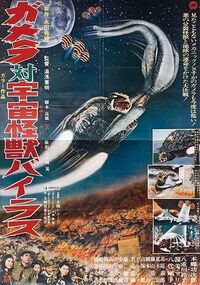 Viras is the main antagonist of the 1968 Japanese kaiju film Gamera vs. Viras.

Viras was the scout for the Virasians, a species of squid-like aliens intent on conquering the planet Earth. He achieved his gigantic form after combining with numerous other Virasians.

Viras is a bipedal gray cephalopod with two "leg" tentacles, two "arm" tentacles, and two tentacles trailing behind. It has red eyes, a large beak, and three tentacles on top of its head.

Viras was killed after Gamera froze him solid using the cold vacuum of space and then dropped him back down to Earth. 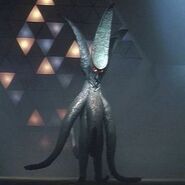 Add a photo to this gallery
Retrieved from "https://movie-monster.fandom.com/wiki/Viras?oldid=1738"
Community content is available under CC-BY-SA unless otherwise noted.