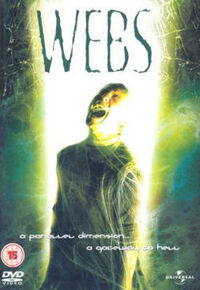 The Web Queen is the main antagonist of the 2003 American science fiction-horror film Webs.

When a scientist creates a machine that will open an interdimensional portal, it reveals a parallel universe ruled by an alien spider creature intent on enslaving the human race.

The Web Queen is a large spider-like creature with an enormous abdomen and six spider-like legs. Sprouting from the normal spider-like body is a more human-like torso, creating what is effectively a "spider centaur". Her human-like forelimbs end in large scythe-like blades, and her head is bulbous like that of a grey alien. She has large jaws and numerous eyes.

The Web Queen possesses the following powers and abilities:

The queen is killed after power cables are attached to her body, electrocuting her to death.

Add a photo to this gallery
Retrieved from "https://movie-monster.fandom.com/wiki/Web_Queen?oldid=1704"
Community content is available under CC-BY-SA unless otherwise noted.