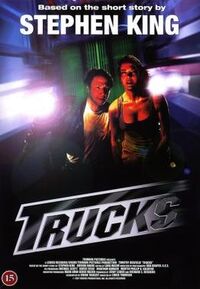 The Westway Refrigerated Truck is the main antagonist of the 1997 American horror film Trucks.

When trucks around the country gain sentience and become aggressive, a group of survivors is holed up in a gas station by a gang of vehicles led by semi-truck, who demands that the humans feed them gas in exchange for sparing their lives.

The Westway Refrigerated Truck is a large silver Western Star 4964 18-wheeler semi-truck. Its cabin has two tall exhaust pipes, one on either side, and the trailer has the "Westway" logo on either side.

The Westway Refrigerated Truck possesses the following powers and abilities:

The Westway Refrigerated Truck is seemingly destroyed after it is blown up in an explosion. However, the final scene reveals that it survived, only to be defeated again after it is tricked into crashing into a pond.

Add a photo to this gallery
Retrieved from "https://movie-monster.fandom.com/wiki/Westway_Refrigerated_Truck?oldid=923"
Community content is available under CC-BY-SA unless otherwise noted.