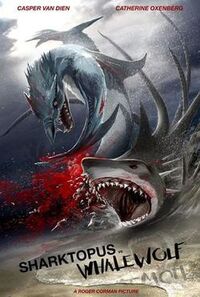 The Whalewolf, formerly known as Felix Rosa, is the main antagonist of the 2015 American horror film Sharktopus vs. Whalewolf.

As part of a surgical treatment for retired baseball player Felix Rosa, mad scientist Dr. Reinhart combines the DNA of a wolf and a killer whale in an experiment that transforms Rosa into a gigantic whale/wolf hybrid with the brain of a human.

The Whalewolf is a quadrupedal creature with a digitigrade stance and a white and black coloration (like that of a killer whale). Its head is that of a wolf, as is its overall body shape. However, it also possesses the tail flukes and large dorsal fin characteristic of killer whales.

The Whalewolf possesses the following powers and abilities:

The Whalewolf is killed after it is bombed by several fighter jets.

Add a photo to this gallery
Retrieved from "https://movie-monster.fandom.com/wiki/Whalewolf?oldid=2442"
Community content is available under CC-BY-SA unless otherwise noted.