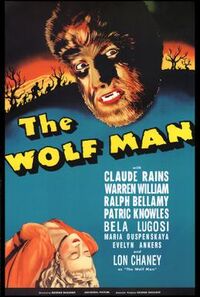 The Wolfman appears to be a large, bipedal muscular hairy wolf creature with sharp fangs and razor sharp claws.

In the 1941 film, the Wolfman is killed when it is beaten by John Talbot with his cane, causing the Wolfman to collapse and slowly transform back into Larry Talbot while dying. In the 2010 remake, John Talbot, as a Wolfman, is kicked into a fireplace before being slashed and decapitated by his own son Lawrence, who has also transformed into another Wolfman. Lawrence in his Wolfman form is then later killed by Gwen Conliffe with a silver bullet before reverting to normal and dying peacefully.