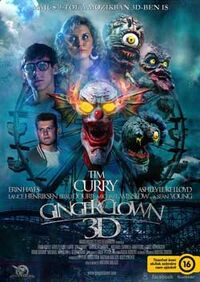 Worm Creature is a minor antagonist in the 2013 Hungarian comedy-horror film Gingerclown 3-D.

Worm Creature is an enormous obese creature who seems to prefer to spend his days spouting off excessive profanity and listening to music on his often-broken record player.

Worm Creature appears to be a large, obese, red worm-like creature with a blobby body. Aside from his two small hands embedded in his flab, his own distinguishing feature is his human-like head, which has two yellow eyes, two open nostrils, a mouth, and numerous chins.

Worm Creature's fate is left unseen, so it is assumed he survives the events of the film. 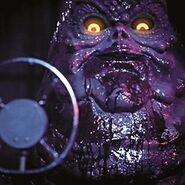 Add a photo to this gallery
Retrieved from "https://movie-monster.fandom.com/wiki/Worm_Creature?oldid=1173"
Community content is available under CC-BY-SA unless otherwise noted.