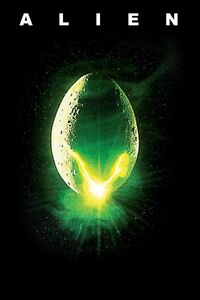 The Xenomorph is the main antagonist of the 1979 American horror film Alien and its sequels.

After receiving a distress call from a nearby planet, the cargo ship Nostromo accidentally uncovers a species of parasitic, biomechanical extraterrestrials that accidentally stow aboard the ship in the chest cavity of one of the crew members.

The Xenomorph is a tall semi-humanoid creature with black, wet skin and a biomechanical, almost skeletal appearance. Its head is long, vaguely phallic, and eyeless. Its mouth is filled with numerous silvery teeth and a tongue-like projection tipped with a second mouth. Its long thin tail is lined with vertebrae-like bumps, giving it a shape similar to a chainsaw chain, and this tail is tipped with a long spike.

The facehugger, the first stage in the creature's life cycle, is a creature with pale skin that resembles an octopus mixed with a scorpion. It has a long tail, numerous grasping tentacles, and a vagina-shaped orifice on its underbelly.

The larval chestburster resembles a smaller version of the adult Xenomorph with pale fleshtone skin.

The Xenomorph possesses the following powers and abilities:

The Xenomorph is killed at the film's end after it is shot out the ship's airlock, sending it into the vacuum of space.

Add a photo to this gallery
Retrieved from "https://movie-monster.fandom.com/wiki/Xenomorph?oldid=1447"
Community content is available under CC-BY-SA unless otherwise noted.